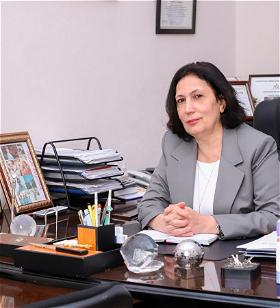 J. Garibova is the author of some local and international projects on the higher education integration into the international educational space and its modernization. Various programs were conducted by her in close cooperation with the European Union, American Education Council, British Consulate and Turkish Cooperation and Coordination Agency (TIKA). In the framework of collaboration with the different foreign universities Jale Garibova created the number of successful exchange programs, many of which are still being used.
Among them are dual diplomas project in Azerbaijan (realized in cooperation with Essex University) and delocalization project (in cooperation with Strasbourg University).
During her tenure AUL became the first Azerbaijan university to win European Union`s TEMPUS grant. It got two grants -for the translation specialty modernization in 2010 and for foreign language learning for professional use in 2013.
Jale Garibova carries out extended research activity in sociolinguistics. She`s the author of more than 60 articles, published in both local and international scientific literature; the author of 2 books and the coauthor of 3 books.