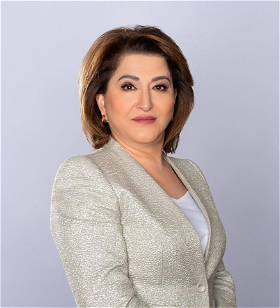 After finishing Baku secondary School № 180 with a gold medal in 1976, T. Jafarova entered Lomonosov
Moscow State University Faculty of History in the frame of overseas education program, launched on
the initiative of our country’s National leader Heydar Aliyev .

Tamam Jafarova has always effectively combined her pedagogical and research work with active
participation in social and political life of the country. She has made a great contribution to the civic
society and women movement development.
2000-2002-Founder and the Chairperson of the Association of Women with University Education, co-
founder and member of the Women Coalition of Azerbaijan (Coalition 1325), member of the United
Nations Development Fund for Women(UNIFEM), member of the Women Coalition of the of the
Southern Caucasus.

2000-2005- Vice-President of Azerbaijan National Non -Governmental Organizations (NGO) Forum.
2006-2016-Azerbaijan Republic Central Election Commission member.
Since 2005-Co-founder and one of three co-chairpersons of the National Confederation of Azerbaijani
Women. The honorary president of the organization is Mehriban Aliyeva, First lady of the country.

He is a deputy of the 6th convocation of the Milli Majlis from Shamakhi.