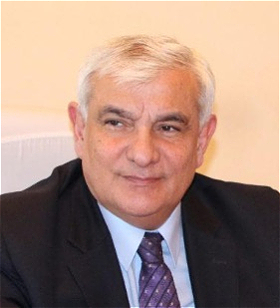 Kamal Abdullah (full name: Kamal Mehdi oghlu  Abdullayev), the rector of Azerbaijan University of Languages (June 1, 2017), People`s Writer, the State Advisor for  the multinational, multicultural and religious affairs of the Republic of Azerbaijan  (2014-2017), PhD, Professor, Honored Scientist, active member of ANAS , the chairman of Azerbaijan Creative Foundation, former rector of Baku Slavic University (2000-2014), linguist, literary critic; as well as a member of the Board of Trustees of the Republic of Azerbaijan (2014-2018), Chairman of the Board of Trustees of Baku  International Center for Multiculturalism.

K. Abdullah was born on December 4, 1950 in a family of intellectuals. His father was a teacher, and his mother was a doctor. In 1968, he graduated from secondary school # 190 in Baku.

In 1968-1973, he studied at the School of Philology of Azerbaijan State University. He was a post-graduate student of the department of “Turkish language” at the Institute of Linguistics of the Academy of Sciences of the USSR in 1973-1976.

In January of 1977, he defended his PhD thesis on “Syntactical parallelism” ( “Kitabi Dede Korkut” epos).

In 1984, he defended his doctoral thesis on “Theoretical problems of Azerbaijani language syntax “.

He is the author in the field of the ancient epic literature research of Turkic peoples. He took special courses and lectures on cultural aspects of “General linguistics”, “Text syntax”, “Kitabi Dede Korkut” epos at the universities of different countries (Russia, Turkey, Poland, France, Germany, and USA). Scientific and journalistic articles are regularly published both in Azerbaijan and abroad.

A book “Lectures at Baku Slavic University” (Baku, Translation , 2003) ( “the “)  (together with Acad. A. Mirzajanzadeh) was devoted to literature and poetry.

He is the author of more than 200 articles and 20 textbooks and monographs.

He is engaged in arts, his plays, stories, novels, essays and poems are published in Azerbaijan and abroad.

Kamal Abdulla is the author of “The incomplete manuscript”, “Wizards valley”, “Nobody to forget …” novels, collections of poems and stories. His several books of drama works have been published in Azerbaijani, Russian and Turkish languages : “Nobody to forget” (Baku, Publishing House, 1995), “The Spirit” (Baku, Publishing House, 1997), “Spy” (Baku, Translator, 2004) “Spirit” (Ankara), ” All my sorrows ” (Baku-Translation 2009) and others.

Some of the poems were collected in “Strange, is not it ?!” book (Baku, Baku State University Publishing House, 1998). “Silver Age secrets” (Baku, Translator, 2001), a book of translations of Russian poetry Silver Age poet sample. His essays, poems, short stories, translations, plays have been published in ” Sad Selections ” book (Baku, Translator, 2002).

In June 2000, by Order of the President Heydar Aliyev was appointed the new rector of the Baku Slavic University. He has worked in this position till February 28, 2014.

He is the author and one of the organizers of “Kitabi Dede Korkut” and “Song of the Nibelungs” 10-year international project, which was started to be implemented in 2009, (in collaboration with the German Society of Mainz University and Folkenstayn).

His works have been translated into Russian, Georgian, English, French, German, Spanish, Polish, Portuguese and other languages, plays have been staged in theaters of Azerbaijan, Georgia, Estonia, and Turkey.

In addition, in 2006, “Wizards valley” dealing with the life of Sufi dervishes was published under the name “Buyuculer deresi” in Istanbul, “Долина Кудесников ” in  St. Petersburg ( “Zlatoust”, 2010), “Stebukladariu slenis” in  Lithuania (Vilnius “Edukology” 2013), and in 2013 Japan’s “Micitani” publishing house. His  collection of poems and plays “The owner of the road “were published in Moscow, in Russian, , (Moscow, Rif Roy, 2004). Books about him “The Mystery of Sadness” (author Elchin  Selcuk) was published in Azerbaijan and   “Kamal Abdulla’s plays in Turkish” (author: Mehman Musaoghlu)was published  in Turkey. Articles have been published in Russia, Turkey, France, Brazil, and Poland in relation to his scientific and artistic creativity.

In November 2009, presentation of the book “From myth to writing or hidden Dede Korkut” was held  in Strasbourg, France, Poland, Warsaw, University of Mainz in Germany and  delivered lectures on the topic “Kitabi Dede Korkut”. As well as, presentations of  “Unfinished manuscript” was held  in 2006 in Paris and in 2007 in Moscow, in 2012 in Brazil (Paraiba University), in 2013 in Austria (on the initiative of the Graz University German Language and Literature Institute named  after Karl and Franz), in November 2013, in London (European Azerbaijan Society), in February 2014 in Berlin (Humboldt University).

Kamal Abdullah was appointed Rector of Azerbaijan University of Languages by the Order of the President of the Republic of Azerbaijan Ilham Aliyev dated June 1, 2017.