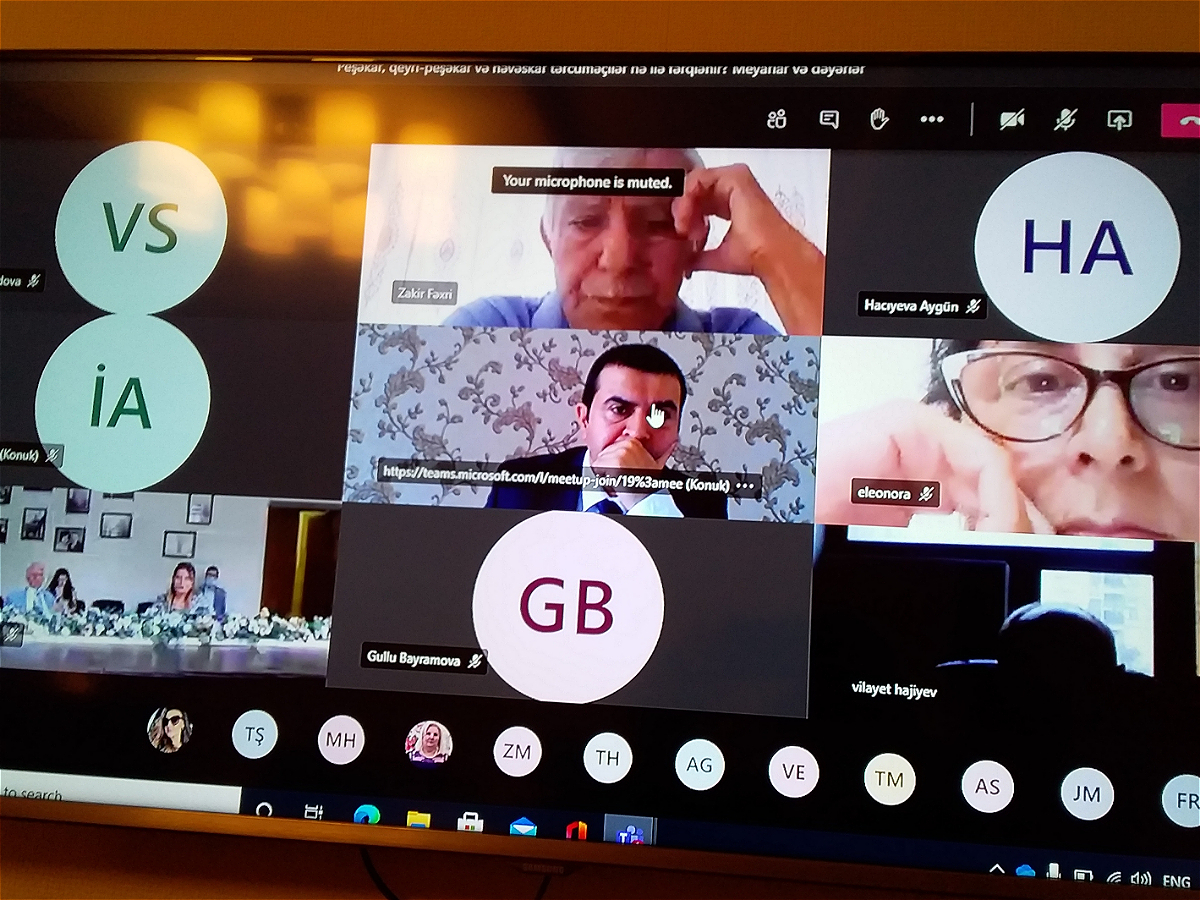 Scientific online conference on the theme "Differences between professional, non-professional and amateur translation" was held at the Azerbaijan Language University (AUL) on September 21.  The conference, organized by AUL in collaboration with the Azerbaijan Professional Translators Association, was dedicated to the 95th anniversary of the outstanding Azerbaijani translator and linguist Ismikhan Rahimov.

Opening the event, AUL Rector, Academician, Chairman of the Azerbaijan Professional Translators Association, People's writer Kamal Abdullah emphasized that this day was the anniversary of the outstanding linguist, great Azerbaijani intellectual Ismikhan Rahimov. He noted that today's students' successes have been made possible through the efforts and hard work of Ismikhan Rahimov. The Rector emphasized that the bright memory of I. Ragimov would always live in people's hearts: "He was a very brave man.  Ismikhan Rahimov was one of the first who raised the flag on the way of democratic development of Azerbaijan. In 1950s his voice was heard from the political arena. The great contribution in promoting the use of Azerbaijan language; as well as in drawing public attention to the country's natural wealth and to the social and political processes taking place here, made by Ismikhan-muallim along with the other intellectuals can hardly be overestimated ".

Kamal Abdullah continued that later Ismikhan-muallim pursued his battle in another field of activity, sharing his knowledge and experience in front of the student audience and at the Academic Council meetings. Academician emphasized that the universities, as well as the other educational institutions of different regions were interested in cooperating with Ismikhan- muallim: "Today his students are leading lecturers not only at our university. May Allah rest the soul of Ismikhan-muallim.  The University of Languages always cherish the bright memory of the worthy sons of our Motherland".

Revealing the background of the Azerbaijan Professional Translators Association establishment, the Rector noted that the organization has already started its activity, and urged everyone to participate in its projects to be implemented in the nearest future: "One of the main directions of the Association's activity is to ensure  systematic translation work from Azerbaijani into the other languages, as it is strongly required due to the existing ideological concerns of the independent Azerbaijan.

This is a very important initiative, because there is an urgent need for fiction, spiritual, social and political literature created in Azerbaijani , as well as for the coverage of processes taking place in the country, to be made accessible to the peoples of the world in their native languages. With such an approach Azerbaijan will easily and confidently take its worthy place among the nations of the world". Rector Kamal Abdullah noted that the establishment of the Association with the participation of staff and on the basis of technical supply of the Language University has been an indicator of confidence of state bodies and public organizations.

Then Professor Gylynchhan Bayramov told about the invaluable activity of Ismikhan Rahimov. He mentioned the auditorium named after Ismikhan Rahimov, the creation of which expressed the University's deep respect for his bright memory.  Professor G. Bayramov talked about the linguist's struggle for independence of the country and for the development of Azerbaijani language.

Professor Vilayat Hajiyev gave a speech  on life and creative activity of Ismikhan Rahimov. Underlining the importance of the conference, V.Hajiyev drew attention to the features of translation of Azerbaijani literature into the world languages.

Poet Zakir Fakhri shared his memories related to Ismikhan Rahimov.  He also reported on the forthcoming activities of the Azerbaijan Association of Professional Translators.

There also was a discussion held during the conference.